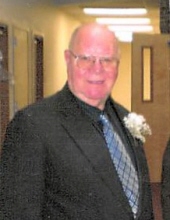 Beloved husband of the late Adella (Della) Sukup White, loving son of the late Willis White and Pearl Harriet Snell White and brother to the late E. Darlene White Sahr. He is survived by his nephew, Jack (Diana) Sahr of Downers Grove, Illinois, niece, Connie Sahr Brallier of Brookings South, Dakota, and grand nephews, Grant Sahr of Downers Grove, Illinois, Austin Sahr of Aurora, Illinois, Tony Brallier of Brookings, South Dakota, and Toby Brallier, of Mason City, Iowa. Bill graduated from MCHS in 1957 and attended NIACC from 1957-1959. He worked for Jacob E. Decker and Sons before entering the military in 1961. Bill retired from the Air Force in 1981 after serving 20 years. Upon his return from the service Bill owned the Ceramic and Feathers shop with his sister Darlene Sahr.

Bill loved the Lord, had a kind heart and love for everyone.

To send flowers to the family in memory of Willis "Bill" White, please visit our flower store.