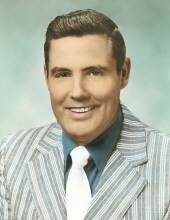 William Valjean Patrick was born June 23, 1933, in Mason City to parents Valoris and Mabel (Trease) Patrick. Bill attended and graduated from Mason City High School, upon graduating he joined the military serving in the Army, Navy, Air Force, National Guard and the Navy/SeaBees over the course of 32 years. Bill was very proud of his military service and was a veteran of the Korean War. Bill was also the co-founder and co-owner of Northern Construction and Supply Company.

On July 23, 1953, Bill was united in Marriage to Margaret Hanson. Over the course of their lives the two enjoyed going to casinos and traveling to antique shows with the goal of finding different collectibles that would catch their eyes. After Bill’s retirement from the military you could always find him at McDonalds every day for morning coffee with the guys, it was something that he rarely if ever missed.

The family wishes to extend their gratitude and appreciation to the staff at the Heritage Care and Rehabilitation center and to Hospice of North Iowa for the care and compassion provided to William and his family.

To send flowers to the family in memory of William Valjean Patrick, please visit our flower store.