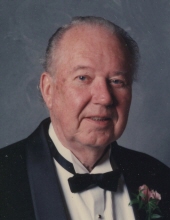 Visitation will be held on hour prior to the service time on Thursday.

Interment will be held in the Hampton Cemetery.

Memorials can be directed to the American Cancer Society or the Humane Society of North Iowa.

William McBurney Seeger was born on April 8, 1928, in Ingham Township in Franklin County, Iowa, to parents Kenneth Paul Seeger and Lucia Viola (Imlay) Seeger. Bill’s father died when he was 1 ½ years old. He was raised by his mother’s parents John McBurney and Lottie Ladora Wohlford (Imlay). On May 22, 1944, William graduated from Hampton High School. Following his graduation on June 1, 1944, he enlisted in the United States Navy. He served in Guam and in the Pacific. He was honorably discharged on April 16, 1948.

On August 26, 1948 he was united in marriage to Ethel Iola Bachman. Between this union three children were born: Kenneth, Valerie and Vickie. Iola passed away on February 6, 1982.
After his time in the service Bill attended the American Institute of Business in Des Moines graduating in 1950. While in school he worked part time for the J.C. Penny Company and Wright Tree Service. After graduating he worked for Fahrmann Motors and Murphy Transportation Co. both in Hampton. Then for a short time he was employed by the L.A. Chemell Co. in Goldfield. Bill then went on to work for Frank J. Enbusk & Co., CPA’s as a Staff Accountant in August of 1956. He passed his CPA exam in his first sitting in November of 1959, receiving his CPA certificate in February of 1960. Bill remarried on November 3, 1984 to E. Julene Fry. On January 1, 1961 he became a partner in Frank J. Enbusk & Co. On November 1, 1977, Frank J. Enbusk & Co. merged into the McGladrey & Pullen Firm where he became a partner. Bill retired from McGladrey & Pullen on April 30, 1991. Following his retirement, he joined the staff at the Clear Lake bank and Trust Company on May 1, 1991. He retired from the Clear Lake Bank and Trust as Assistant Vice President/Auditor on May 31, 2000.

To send flowers to the family in memory of William McBurney Seeger, please visit our flower store.