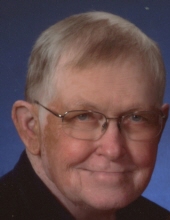 Memorials may be directed to the Greater Iowa Alzheimer’s Association.


Bill was born December 19, 1942, in Mason City, Iowa to Melvin A. and Ruth J Frelund (Roberts). He attended Mason City schools and graduated in 1961. Bill was involved in various activities and excelled at choir, being named Iowa All State vocalist his senior year.

After high school, Bill continued his education at Mason City Junior College, graduating in 1963. He continued onto Iowa State University and graduated in 1965 with an Industrial Education degree. He published an ag research novel that still belongs in the Iowa State libraries today. This is where his love for the Cyclones began.
He landed his first teaching job in Minneapolis at Central High School as a shop teacher. After 4 years he moved back to Mason City and taught Industrial Arts at Mason City High School. In 1974, Bill attended a party and met the love of his life Renee Bruns. They got engaged and married on May 3, 1975, in Kiester, MN. To this union two sons were born, Mike and Tom.

Bill was a tinkerer and enjoyed working on and collecting radios and electronics. This led him to a job at Decker Audio Visual. Eventually he worked at NIACC and finished his working career fixing typewriters and copiers with Mason City Business Systems and Fiala Office Products.

Bill’s biggest passion in life was bowling. He enjoyed bowling league every week and eventually became league president and joined the Mason City Bowling Association. He always talked about his 275 high game and 659 high series. He passed this passion onto his boys, and they continue bowling today.
Sunday nights you would find Bill at the Mason City speedway. The speedway was a setting for many wild nights which included smuggling in their own beers and Bill’s nephews sneaking drinks from under the bleachers. Bill always said that you are not having fun at the races unless you have dirt in your beer.
Bill will be missed by everyone. He always had a good story to tell and a laugh that could fill a room.

Bill was preceded in death by his parents; wife Renee Frelund; and sister Marilyn Anderson.

To send flowers to the family in memory of William M. Frelund, please visit our flower store.