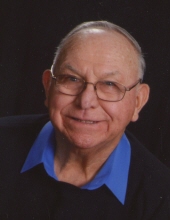 Private family funeral services will be live streamed at 10:30 AM Monday, January 18, 2021 on the Major Erickson Facebook page. Interment will be held in the Clear Lake Cemetery, Clear Lake, IA. Public visitation will be held Sunday, January 17, 2021 from 3 until 5 PM at the Rockwell United Methodist Church. Masks will be required by all and those attending are asked to social distance. Those wishing to express their sympathy may direct memorials to the William Ames Memorial Fund.

Bill was born September 7, 1937 the son of Lloyd and Ethel (Long) Ames in Swaledale, Iowa. Shortly after high school Bill met Virginia Anderson and the couple was later united in marriage on June 9, 1957 in Ventura, Iowa. To this union 5 children were born.

Bill loved sports and different outdoor activities. He was always eager to follow his children, grandchildren and great-grandchildren’s numerous activities and was a number one fan of all. If his beloved Dallas Cowboys or New York Yankees were playing you would find him engrossed in the tv as to not miss a play. Ever since he was a young boy Bill had a love for horses including his own horse Joe and the Ames Percheron Draft Horse teams. He loved to watch them compete and was so proud when he got to drive one of the teams of horses. Bill also enjoyed golfing, fishing in Northern Minnesota and in his younger years snowmobiling with friends. Bill was an active volunteer, he was on the County Conservation Board, member of the Rockwell Chamber of Commerce, served on the Rockwell United Methodist Church board, but most noted for his time given to the Rockwell Volunteer Fire Dept. in which he donated over 41 years and served as the Fire Chief for 26 of those years.

To send flowers to the family in memory of William L. Ames, please visit our flower store.