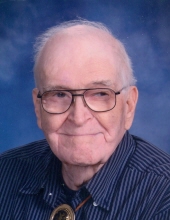 William John “Smoky” Jones, 88, of Mason City, went to be with his Lord and Savior on Monday, November 20, 2017 at the Muse Norris Hospice Inpatient Unit. Funeral services will be held 11:00 AM Friday, November 24, 2017 at Major Erickson Funeral Home, 111 N. Pennsylvania Avenue with Rev. Ron Stein, First Baptist Church officiating. Inurnment will take place in Amsterdam Cemetery, Goodell, Iowa at a later date. Visitation will be held one hour before services at Major Erickson Funeral Home. Memorials may be directed to the William Jones Memorial Fund.

Bill was born September 16, 1929 in Mason City the son of Gilbert and Golda (Carothers) Jones. He graduated from Klemme High School in 1948. Bill attained the rank of Eagle Scout and served as a scout master in Klemme for 20 years. He retired from Winnebago Industries, Forest City in 1992. Bill enjoyed reading, football and baseball and was a member of the First Baptist Church.

Bill was preceded in death by his parents and wife, Lorraine; 3 nephews, Cecil, Conrad and Daniel; 1 niece, Cathy.

To send flowers to the family in memory of William John Jones, please visit our flower store.