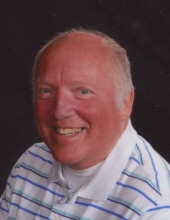 William “Bill” Fred Schoby, 70, of Mason City, IA went to be with the Lord, Thursday, January 21, 2021 at the MercyOne Hospice Inpatient Unit surrounded by his family. Funeral services will be held at 10:30 AM Tuesday, January 26, 2021 at Grace Church, 440 North Illinois Ave, with Pastor Scott Davis officiating. Military honors will be conducted by the Mason City Veterans Association. Interment will follow in the Elmwood-St. Joseph Cemetery. Visitation will be held Monday January 25, 2021 from 4 until 7 PM at the Major Erickson Funeral Home, 111 North Pennsylvania Ave. Social distancing and masks will be required at both the funeral and visitation.

Bill was born December 11, 1950, the son of Fred and Lorraine (Adams) Schoby. Bill graduated from Algona high school in 1969. Upon graduating from high school, Bill joined the United States Army. He was honorably discharged in 1986. Bill was united in marriage to Beverly Meinders on October 3rd.

Following his service to his country, Bill worked for Midwest Wholesale, then Winnebago Industries until his retirement in 2006. In his spare time, Bill volunteered as an usher at Grace Church. Bill loved being outdoors enjoying God’s spender while fishing with his kids, riding his bike, taking walks, or playing ball with his kids and grandkids. One of his favorite things to do was sit on the swing in the backyard with his dog Teddy, he was his sidekick. He enjoyed taking his grandkids for a ride in the wagon. Bill enjoyed taking road trips to Wisconsin in the fall to look at leaves and go to the apple orchard. Bill always looked forward to spring, as it meant tilling the garden and planting his favorite vegetables. He enjoyed nurturing them in anticipation of the bountiful harvest. He was a member of Grace Church.

Bill was preceded in death by his grandparents, father, Fred and a brother David.

To send flowers to the family in memory of William F. Schoby, please visit our flower store.