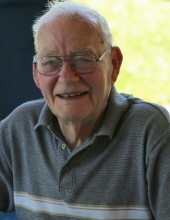 William Edward Bjerke was born June 26, 1926, in Hatton North Dakota, to parents William and Emma Norgaard Bjerke. Bill grew up in Hatton during the great depression and to earn money he would work on the area farms. He graduated from high school in 1944 and while attending high school he enjoyed playing basketball for the home town team. At the age of 17 he left home to join the United States Navy and served during World War II, he was discharged from the military in 1946. In 1947 Bill was united in marriage to his late wife Opal Livedalen, Bill’s childhood sweetheart, in Minneapolis, Minnesota. In this union , Bill and Opal had 3 children. Bill and Opal were married for 36 years.

Bill attended Luther College and graduated in 3 years. Following his graduation he went on to work for Gamble Robinson for 35 years. Hobbies of Bills include playing tennis, genealogy and golfing.

Bill was very active at Trinity Lutheran Church and was an avid sports fan attending as many local sporting events possible. Bill volunteered in many community activities, Salvation Army and Meals on Wheels. A recent highlight Bill and his entire family had was the celebration of his 90th birthday at East Park here in Mason City.

To send flowers to the family in memory of William E. Bjerke, please visit our flower store.