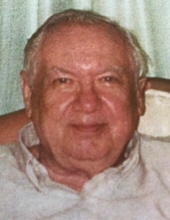 Visitation will be held one hour prior to the service time on Friday at the funeral home.

William "Bill" Kasik was born December 22, 1925, in Mason City, IA the son of William and Bessie (Hrachova) Kasik. Bill attended Mason City Schools and joined the Merchant Marines during his senior year of high school. When WW II broke out, Bill enlisted in the U.S Navy. He was a proud WW II veteran.

In his youth, Bill worked at Sam Raizes Department Store. After the war, he worked at Sears Roebuck & Co. Bill married Marvyl Gettman in 1950 and to this union, four children were born. In 1957, Bill was approached by Max Sawyer regarding a new business venture, Curries Mfg. Bill loved his work and held several positions while at Curries including Vice President. Bill worked at Curries from 1957 until his retirement in 1992.

Bill was a loving devoted father, grandfather and great-grandfather. He loved his family and the outdoors, especially living on Clear Lake, family summer vacations to Brainerd, MN and annual fishing trips to Canada.

The family would like to thank Hospice of North Iowa as well as the staff at Country Meadow Place for the care and comfort they provided to Bill.

To send flowers to the family in memory of William "Bill" Kasik, please visit our flower store.