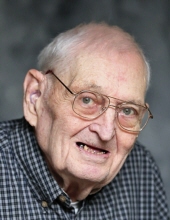 Weston “Bill” Floyd Cottrell, 94, of Mason City, died Wednesday, September 20, 2017 at the I.O.O.F. Nursing Home. A memorial service will be held at 10:00 AM Monday, September 25, 2017 at Major Erickson Funeral Home, 111 N Pennsylvania Ave, with Pastor Dave Byrd, Chaplain – I.O.O.F Nursing Home officiating. Burial will take place in the Clear Lake Cemetery. In Lieu of flowers memorials can be made to the Weston Cottrell Memorial Fund.

Weston was born August 16, 1923 on the family farm in Fertile, IA to parents George and Mabel (Ure) Cottrell. Weston joined the Army in March of 1943. After his basic training he was deployed overseas. He served in the European Campaign, spending time in Africa, Sicily and Italy. Weston was discharged from the Army in October of 1945; he was the recipient of the Bronze Star and 5 Major Battle Stars. On June 8, 1947 he was united in marriage to Zell Nelson.

To send flowers to the family in memory of Weston "Bill" Floyd Cottrell, please visit our flower store.