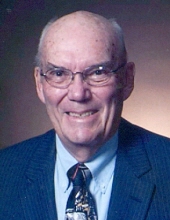 Wayne Sanborn Hult, 96, of Mason City, IA, passed away peacefully on Saturday, January 13, 2018. Memorial services will be held at 2:00 PM on Thursday, January 18, 2018, at the First Covenant Church, 411 S. Ohio Avenue, with Rev. Steve Johnson officiating. Military honors will be conducted by the Mason City Veterans Association. A gathering of family and friends will be held one hour prior to the service. Inurnment will take place at the Scandinavian Cemetery in Rockford, IL at a later date. In lieu of flowers, memorials may be directed to the family of Wayne Hult.

Wayne was born July 17, 1921, in Davenport, IA, the son of Leslie P. and Eva (Sanborn) Hult. At the age of 3, Wayne's mother died. Wayne was then raised by his paternal aunt and uncle, Elmy and Bill Peterson, in Rockford, IL. They provided him with a good Christian home. Wayne graduated high school in Rockford, IL, and continued his education at Knox College in Galesburg, IL, where he was active in ROTC.

After graduating from Knox, Wayne entered the U.S. Army in July of 1943. He fought in WWII where he was injured on Christmas Eve 1944, in the Battle of the Bulge, a battle fought on an 80 mile front running from southern Belgium to the middle of Luxembourg. Wayne received 2 Bronze Stars and a Purple Heart for his service. Wayne also served as a Captain with the 80th Infantry Division of the Third Army.

Wayne married Katherine L. Meyer on June 3, 1967, in Chicago, IL. They moved to Mt. Prospect, IL, a northwestern suburb of Chicago, where they raised their two children, Leslie and Geoffrey.

Wayne was a Director of Promotions at United Dairy Industry Association in Chicago, IL for 33 years until he retired in 1986. Following retirement, Wayne stayed busy being a ranger at the Mt. Prospect Country Club. He also worked for the Illinois Environmental Protection Agency (EPA). Wayne was an active member of Northwest Covenant Church serving on a number of boards and teaching Sunday School. He was very involved in his children's activities as well as community/political groups. He enjoyed flying, sailing, skiing and spending time with his wife, children, and pets.

In 2002, Wayne and Katherine relocated from Mt. Prospect, IL, to Mason City, IA. They joined the First Covenant Church where they were warmly welcomed by new friends. Wayne enjoyed attending his grandchildren's sporting events and other activities. Wayne was a loving husband, caring father, and proud grandfather. Wayne and Katherine recently celebrated their 50th wedding anniversary.

He was preceded in death by Leslie and Eva Hult; Elmy and Bill Peterson; and a brother: Stewart Hult.

To send flowers to the family in memory of Wayne Sanborn Hult, please visit our flower store.