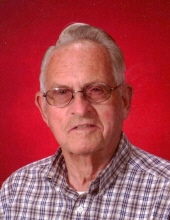 Wayne O. Oswood, 86, of Mason City, Iowa, died Tuesday, February 18, 2020 at the Good Shepherd Health Center. Funeral services will be held at 10 AM Saturday, February 22, 2020 at the Wesley United Methodist Church, 1405 South Pennsylvania Ave, with Pastor Craig Luttrell officiating. Interment will follow in the Memorial Park Cemetery. Military honors will be conducted by the Mason City Veterans Association. Visitation will be held Friday, February 21, 2020 from 5:30 PM until 7:30 PM at the Major Erickson Funeral Home, 111 North Pennsylvania Ave. Memorials may be directed to the Wesley United Methodist Church or MercyOne Hospice of North Iowa.

Wayne was born on August 21, 1933 to Estle and Merle (White) Oswood in Hansell, Iowa. He graduated from Hansell High School in 1951. After graduation, he worked as a carpenter for Burroughs Construction Company for several years. Wayne was then drafted into the US Army on January 5, 1953 and served until he was honorably discharged on October 20, 1954. During that time, Wayne served in Korea with Battery C 424 Field Artillery Unit as a Fire Direction Center Coordinator on a mountain outpost as a forward observer. Wayne was also appointed First Sergeant of that unit after the cease fire, before being discharged. Wayne received United Nations Service Medal, Korean Service Medal with one Bronze Service Star, and National Defense Service Good Conduct Medal.

On September 1, 1957, Wayne married Marlene Williamson in Mason City. Three children were born in this union: Julie, Jon, and Janine.

Wayne bought and remodeled houses and apartment buildings. He worked at the US Post Office for 26 years as a city and rural mail carrier. Wayne also owned and operated the roller rink in Clear Lake for 9 years, called Clearview Roller Rink, along with his family. Wayne retired from the Post Office in 1993.

Wayne enjoyed going to coffee at Shills Maid Rite. He enjoyed fishing and camping, his 1956 Chevy, his 1962 Mercury, going to car shows and parades. His family and grandchildren always came first throughout his life, and he enjoyed everything they accomplished, how well they have done, and how well they continue to do.

Wayne was preceded in death by his parents, Estle and Merle Oswood.

To send flowers to the family in memory of Wayne O. Oswood, please visit our flower store.