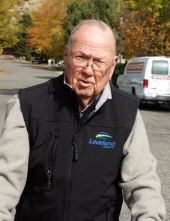 Warren Gates Davison was born November 8, 1926 in Eldora, Iowa to Paul and Ruby (Gates) Davison. Warren married the “love of my life” Marilyn J. March in November of 1946 upon his return from WWII.

Warren served as Cerro Gordo County Engineer for nearly 30 years beginning in 1960. He was active in professional associations receiving state and national awards. After retirement he worked for FEMA assessing national disasters for 17 years.

Warren loved camping, fishing, woodworking, and golf. He loved playing cards, especially cribbage, with family and friends. His time with his family was most important to him.

To send flowers to the family in memory of Warren G. Davison, please visit our flower store.