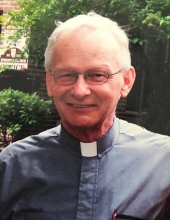 Warren, son of Andrew Frelund and Marie (Rankin) Frelund-Pfeil was born on May 12, 1943 in Mason City. He graduated from Mason City High School in 1961 and went onto the University of Iowa where he studied music and was a member of the University of Iowa Hawkeye Marching Band. In 1962, Warren married Susan Whorley and the couple had three daughters. He was a passionate fan of the Iowa Hawkeyes, Chicago Cubs, and the Chicago Bears. He thoroughly enjoyed gardening, fishing, and spending time with his grandchildren.

Warren, along with his wife, owned and operated Kemble’s Flowers for 30 years where he designed beautiful floral arrangements and took great pride in managing the greenhouse, especially the annual holiday poinsettia crop that he grew from seedlings. The most special floral designs were the stunning bridal bouquets he created for each of his daughters. Early in his career, he was actively involved with Mason City Jaycees (former local president and state vice-president), a member of Rotary Club participating in a Rotary Group Study Exchange to Japan in 1971, Mason City Chamber of Commerce, and past North Iowa Band Festival chairman. Warren was a workforce advisor with NIACC Workforce Development and through that work is past board member of the National Alliance of Business, past president of the National Association of Private Industry Council and served on the National Commission of Employment Policy Advisory Board to the President appointed by President Bill Clinton.
Warren enjoyed a second career as a 24-year ordained deacon with the Episcopal church, working for the Episcopal Diocese of Iowa, the Diocese of Wyoming, and National Episcopal Health Ministries throughout his career. He was a member of the National Episcopal Church Task Force on Older Adult Issues, a trainer with the Episcopal Diocese of Iowa, and facilitated numerous small church workshops in Episcopal dioceses through the country. Most recently, Warren worked part-time at Hy-Vee Drugstore Garden Center where he enjoyed assisting customers with plant and vegetable garden needs.

He was preceded in death by his father, Andrew; mother, Marie; and brother Charles.

To send flowers to the family in memory of Warren F. Frelund, please visit our flower store.