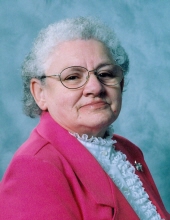 Wanda was born December 23, 1936 the daughter of Menno and Violet (Harberts) Smit in Belmond, Iowa. As a young girl Wanda fell ill with rheumatic fever. She attended school in Renwick and Kanawha. She later earned her GED from NIACC.

Wanda was employed at the Belmond Healthcare Center for eight years and also at the Oakwood Care Center, Clear Lake, for twenty-five and a half years. In her spare time she enjoyed taking in the local garage sales and working on jigsaw puzzles. She collected postcards and relaxing with a good book and was always interested in learning more trivia.

Mrs. Hall was preceded in death by her parents, husbands, Emery and Fayne, and her daughter, Debra.

To send flowers to the family in memory of Wanda M. Hall, please visit our flower store.