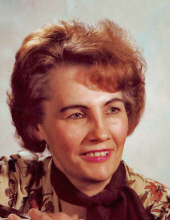 Virginia M. Anderson, 88, of Mason City, passed away Saturday, May 11, 2019 at the Rehabilitation Center of Hampton.

Visitation will be held from 5 to 7 P.M., Wednesday, May 15th at Major Erickson Funeral Home, 111 N. Pennsylvania Ave., in Mason City and will resume one hour prior to services at the church.

Memorials may be directed to Trinity Lutheran Church or MercyOne North Iowa Hospice.

Virginia Mae Anderson, the daughter of Lester and Helga (Helgeson) Peterson, was born February 15, 1931 in Austin, Minnesota. She grew up in Lyle, Minnesota where she graduated from high school in 1949. During high school, she worked at Naeve Hospital in Albert Lea. She then moved to Mason City and was employed at Park Hospital from 1949 to 1952. On August 17, 1952 she was married to Calvin Anderson at Trinity Lutheran Church in Mason City. They lived in Mason City where they raised their family. Virginia worked at Mercy Medical Center as a nurse’s aide for 19 years retiring in 1986. She enjoyed her family, sewing, embroidering and trips with Calvin to Branson, Missouri.

She was a member of Trinity Lutheran Church.

She was preceded in death by her parents; daughter, Charlotte Anderson; and a sister, Margie (Gary) Williams.

To send flowers to the family in memory of Virginia M. Anderson, please visit our flower store.