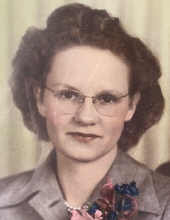 She was preceded in death by her parents, sisters, husband, Robert and son, Richard.


Verna was born March 25, 1923, and entered the gates of heaven March 24, 2022, just six hours short of her 99th birthday. Her life began in Spencer, Iowa where her parents, Parepa and August Claussen, and grandparents, Scott and Frances Case, made their homes. She was the youngest of several daughters. Her father worked as a grading Contractor.

The family moved to Mason City, Iowa when Verna was elementary school age. She graduated in 1943 from Mason City High School. As a young woman she worked in many places including a phone company, grocery store and candy store. During this time, she met her future husband, Robert E. Aastrup.

They married on January 1, 1949, in Thornton, Iowa after Robert returned from his service with the Navy during WW11. The marriage continued 67 years until Robert passed away at the age of 90 in 2016. Robert and Verna created their life together as farm owners and operators in the areas surrounding Burchinal, Iowa.

Their first child, Richard, joined their life in April 1951 and daughter, Jeannine, followed in September 1953. Richard died in 2015 following an accident.

Verna dearly loved all the little grandchildren that followed and spent as much time as possible with them. All fondly remember the goodies she baked and the fun times they shared at holidays, summertime parades and festivals. She and Robert enjoyed many wintertime get-aways to warmer climates including Arizona, Texas, and California. They would park their Airstream Trailer and meet up with friends to visit local points of interest, shop, play cards, and dine out.

Verna’s role in life was that of a caretaker. She watched over the entire family from her parents and sisters to her husband and children and on to the grandchildren and the great grandchildren. The coffee pot was always on at Verna’s house and home baked goodies were served to enjoy with it.

To send flowers to the family in memory of Verna L. Aastrup, please visit our flower store.