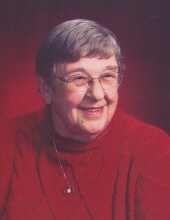 Inurnment will be held in Memorial Park Cemetery.

Memorials may be given to the American Cancer Society.

Vera Rastedt was born November 26th, 1927 in Mason City IA. She grew up in the Mason City area, lived during the war years in Dayton, Ohio before returning to Mason City after graduating from Dayton Ohio High School. She was the only child of Nellie (McIntosh) and William Rastedt and was later adopted by her stepfather, George E. Smith.
Vera married Lloyd Ernest Stockberger on Aug. 22nd, 1947, spending their 55 years of married life in Mason City until Lloyd’s death in 2002.

Vera was preceded in death by her husband, Lloyd Stockberger and her parents, Nellie and George Smith.

To send flowers to the family in memory of Vera Mae Stockberger, please visit our flower store.