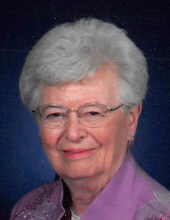 Funeral services will be held 10:30 A.M., Friday, October 30, 2020 at First United Methodist Church, 119 S. Georgia Ave., Mason City with Rev. Carol Kress officiating. Interment will be at Elmwood – St. Joseph Cemetery. Due to the pandemic, masks would be appreciated, and social distancing guidelines will be followed.

Visitation will be held one hour prior to services at the church on Friday. Major Erickson Funeral Home is in charge of arrangements.

Should you wish to honor Velva, memorials may be made to the First United Methodist Church or MercyOne North Iowa Hospice.

Velva was born on April 27, 1925 in Webster City, Iowa, the daughter of Donald and Ester (Butler) Silver. She was raised by her paternal grandparents, James and Nora Silver. Velva was the devoted wife of Cortland Peterson for 71 years, beloved mother of Becky and Brent, and cherished grandmother to two grandsons and four great granddaughters. After graduating from Webster City High School in the Class of 1943, she enrolled at Iowa State Teachers College (now the University of Northern Iowa) and completed her degree in Elementary Education. Velva taught public school in Pocahontas, Iowa, before moving back to Webster City to accept a fifth-grade teaching position. It was in Pocahontas, where she met Cortland Peterson when he was home on leave from the Navy. They were married on June 15, 1949, and located to Rock Island, Illinois where Cort completed his degree at Augustana College and Velva continued her teaching career in Davenport, Iowa. Velva treasured her friendships in P.E.O. Chapter K.W., her bridge clubs and her church circle. Her favorite pastimes were needlepointing, wintering in Florida and watching her two grandsons play high school and college football.

To send flowers to the family in memory of Velva Louise Peterson, please visit our flower store.