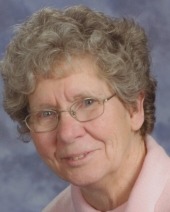 Velma Reynolds was born on May 28, 1936, to parents Verdie and George Kenward. She married Alan M. Reynolds on June 30, 1952. She had three children Raymond Reynolds, Brian Reynolds, and Christina Dodge (Matt). She was a stay-at-home mom most of her life, but after Allen’s death she worked at Alexander Batteries and Mercy North Iowa, until retirement. When Velma had free time, she could be found quilting, baking pies or bread for others, or in her beloved flower garden. Per Velma’s request she asked that this obituary not concentrate on the content of her life that is now over. She only wanted others to know that her life, even though it was almost 85 years in length, was short. Velma loved and was loved. She lived a happy life with the two things she valued most, God and family. If you want to do something honor of Velma today, call someone and tell them how much you love them, forgive someone, invite someone to church, make difference in the lives of others. Because in the end, that is all we really have, isn’t it? Each other.

Velma was preceded in death by her husband Allen, Son Brian, Grandparents, Parents, and In-laws, all her brothers, sisters, aunts and uncles and many cousins.

To send flowers to the family in memory of Velma Marlene Reynolds, please visit our flower store.