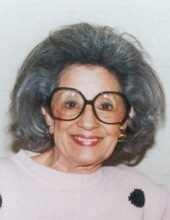 Tula A. Zanios, 98, of Mason City, died Sunday, May 14, 2017 at the Good Shepherd Health Center. Funeral services will be held 10:00 AM Saturday, May 20, 2017 at the Holy Transfiguration Greek Orthodox Church, 1311 2nd Street SW with Rev. Joseph Mirowski officiating. Interment will be in Memorial Park Cemetery. Visitation will be held from 4:00 to 5:30 PM Friday at the church. A Trisagion Prayer Service will be held at 5:30 PM at the church. Memorials may be directed to the Holy Transfiguration Greek Orthodox Church or the Mason City Community Kitchen.

Stomatula “Tula” Ana Karrant Zanios was born prematurely, at home in Fort Smith Arkansas, almost 99 years ago to John and Ana Karrant. The doctor predicted that she and her identical twin, Kula, would not survive a trip to the hospital, so they were placed in a drawer on the open oven door to stay warm. The twins showed their tenacity by thriving under the watchful care of four older siblings who took turns loving and helping nourish them.
Tula met Tom Zanios at her family’s restaurant, the People’s Café, in Fort Smith Arkansas. Tom was stationed at Camp Chaffey during WWII. Nick Panos, Tula’s brother–in-law, and his wife Mary met Tom in Little Rock. They told stories of Mary’s twin sisters and suggested Tom look them up when he got transferred to Fort Smith. After first taking Kula out, he ended up courting Tula, although we are not sure if he knew they had switched places. Tula won his heart with her Southern charm and adventuresome spirit. Later he realized he had married one, but had really got two.
Tula would pack up her many suitcases and her two boys, Jamie and Tommy Jr. and board a train every summer to visit family in Arkansas or Florida. She loved eating in the dining cars with the white tablecloths, always befriending other travelers and staff. The boys had the run of the train, seeking out their own adventures. Tom Sr. would fly to join the family when they reached their destination.
Tom’s sisters Marie and Stella took Tula under their wings when she moved to Mason City. They introduced her to the women at the Holy Transfiguration Greek Orthodox Church, where she endeared herself to the other Greeks with her endless energy and willingness to help with the prolific baking events.
Tula and Tom were some of the first people through the door when friends or family suffered adversity. Sadly, their biggest heartache occurred in the early seventies when Tommy Jr. was diagnosed with cancer. After a long intense battle, with treatments and multiple surgeries in many states, Tommy lost his battle and his family lost a wonderful, creative son and brother.
Following that tragic loss, Jamie married Nancy Smythe and they moved to Mason City in 1978. That move, followed by three grandchildren, brought joy back in Tula’s life. While she never got over losing her son Tommy Jr., the joy of her “Golden Treasures” as she fondly called her grandchildren, brought her some of the best days of her life. She threw herself into their activities, reading at school, caring for them after school, taking them around town; she was a fully engaged Yaya. Recently, the addition of four great grandchildren kept her young as she read them stories, sang to them and gave them love and gifts.
Tula engaged with many organizations over the years; Jefferson School PTA, Women’s Club, the Library, MacNider Art Museum and the women’s philanthropic organizations at her church. Her strongest passion was for The Community Kitchen. She was always willing to serve, be it on the board, as a receptionist for doctor visits or on the food serving line. Her specialty was as greeter where she made everyone feel important and needed. She would wish to express a most appreciative thank you to all those who offered generous support to this cause throughout the years with their time, talent and donations to “The Kitchen”. They were an inspiration and it was a time of sharing.
In 2000, the twins set out on a month-long bus trip to Alaska. It did not take them long to discover the microphone and from there the fun began. We did not hear much about the scenery or sites of Alaska (probably because the tour guide never got the chance to speak), but they sure did come back with stories of entertaining the other travelers. Tula and Kula had a telepathic ability to anticipate each other’s thoughts; they once sent each other letters that arrived on the same day – one contained a question and the other had the answer. Most people never could tell them apart. The twins had fun changing places in school, on dates and even as grandmothers. Tula was the ringleader, but Kula was more than a willing participant. Tula and Kula were far more connected than just their identical features – they loved being twins. Tula also had a special connection with her younger sister Christina who lived with Tula on and off for years. First Christina helped raise Jamie and Tommy Jr., then moved back to town to help with Thomas, Whitney and Parker, and finally moved in with Tula for good after Tom Sr. passed away in 1999.
Tula packed a lot of energy and style into a small frame. Her dark glasses, fancy dresses, endless accessories and silver Lincoln with “TJZ” license plates were never hard to spot around town. Tula only knew one spot in life – front and center. Whether it was in Church on Sunday, an event at NIACC or seeing a Presidential candidate come through town, or being there for a friend in need, Tula always found her way to the front. As she transitioned from her home to Kentucky Ridge, then to the nursing home, Tula never lost her passion for life, positive attitude or ability to entertain friends, other residents or her caretakers. John Barron helped her maintain her social calendar after she was no longer able to drive herself and for that we will all be forever grateful.Tula’s grace, compassion, style, gratefulness and unconditional love are inspirational. She warmed countless hearts and will be missed by many, but most of all by her family. May her memory be eternal.

Tula was preceded in death by her parents, John and Ana Karrant, her two brothers Sam and Steve and four sisters, Anastasia (Lucile), Mary, Kula and Christina, her son Tommy Jr. and her husband Tom Sr.

To send flowers to the family in memory of Tula A. Zanios, please visit our flower store.