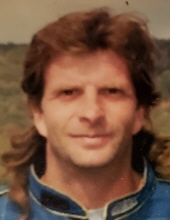 A committal service will be held on Saturday, November 21, 2020 at 11:00 a.m., at Memorial Park Cemetery, with Rev. Mark Lavrenz officiating.

Memorials may be directed to the family of Troy Djuren.

A video of the service will be uploaded to Major Erickson’s Facebook Page after the service for those unable to attend. Due to COVID-19, masks will be required at the funeral home.

Troy was born on September 13, 1966 in Arkansas. He attended at North Central schools and graduated in 1985 from Mason City High School. Troy was married to Tracy Halama on October 17, 1992 until her passing in 1995. He married Crystal Griffith on January 20, 2007.
Troy learned the masonry business working with his father and was known in the construction community for his exceptional stone work. He had a passion for driving, repairing, and collecting Ford F-100 trucks and belonged to the Twin-City F-100 Truck Club in Minnesota and the Henry Haulers F-100 Truck Club in Mason City. He also enjoyed driving his rail speeder at the Clear Lake Trolley Park.

Troy and Crystal competed in numerous Tuff Truck competitions across the U.S. He enjoyed following the Professional Bull Riding circuit and spent vacations attending events. He enjoyed working on the family acreage and sharing walks/play time with his dogs, Bud and Macy and cat, Sassy.

He was preceded in death by his parents, Gordon and Sharon Djuren; and his first wife, Tracy and grandparents.

To send flowers to the family in memory of Troy A. Djuren, please visit our flower store.