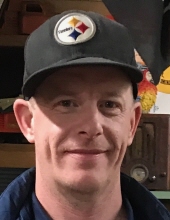 Travis James Hammervold was born on July 23, 1976 in Mason City to the late Michael and Molly (White) Hammervold. From a very early age, Travis loved the outdoors; he was active in Scouting and often went camping in the summers in Rock Falls and Goodell. Some of his favorite camping activities were tubing in the Shell Rock River and going for pick up rides in the Shell Rock River Green belt. Travis was also passionate about collecting sports cards and playing video games.

Travis also loved playing board games. It wasn’t uncommon for him to get into a game of Risk or Monopoly, some of which would last all summer long. He loved to hang out with friends and sit around the fire and tell stories.

In his adult life, Travis loved to cook. He enjoyed jobs at local eating establishments that allowed him to be creative in his menu options. Travis was very passionate about his sports teams especially the Pittsburgh Steelers, Iowa Hawkeyes and the Chicago Cubs. It was a rare site to see him without one of those teams’ logos on his apparel.

Travis enjoyed spending time with his family, especially his children, Chloe and Reagan.
Travis had a very unique laugh that you would know it was him as soon as you heard it. He was the life of the party everywhere he went and he will be greatly missed.

Travis is survived by his mother, Molly; sister, Trish (Troy) O’Hern; children, Chloe and Reagan; niece and nephews, Carter, Lauren, and Colton; and many uncles, aunts, cousins, and friends.

Travis is preceded in death by his father, Michael; grandparents, Max and Nellie White, and Marlett and Bill Hammervold; and cherished friends Jason Brahm and Damon Cory.

The family would like to extend their gratitude to MercyOne North Iowa Hospice, and many close friends that may have helped Travis during his life.

To send flowers to the family in memory of Travis James Hammervold, please visit our flower store.