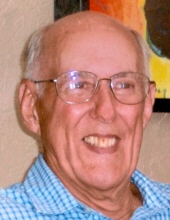 Tjark Hugo, 88, of Mason City, IA died Monday, July 17, 2017 at the Muse-Norris Hospice Inpatient Unit. Memorial services will be held at 10 AM on Thursday July 20, 2017 at Major Erickson Funeral Home, 111 North Pennsylvania Ave, with Pastor Jeff Dahlin of Praise Community Church officiating. Visitation will be held one hour prior to services on Thursday. Memorials may be directed to Hospice of North Iowa.

Tjark was born on June 23, 1929 to Tjark and May (Walkner) Hugo; he was 1 of 7 siblings. Tjark graduated from Mason City High School. After attending a blind date at a picnic in 1958 Tjark met Carita and in 1961 the two were united in marriage at Holy Family Catholic Church in Mason City. Tjark worked for Sedars Motors for over 40 years, during this time he also served his country in the Korean War. Tjark had a great passion for cars; he was a member of the North Iowa Vintage Auto Club. He also enjoyed golfing, camping and being outdoors. During the winter he and Carita would winter in Arizona and would do so for 10 years.

Tjark is preceded in death by his parents Tjark and May (Walkner) Hugo; siblings Hester, Leroy, Mae, Gunther and son Robert.

To send flowers to the family in memory of Tjark E. Hugo, please visit our flower store.