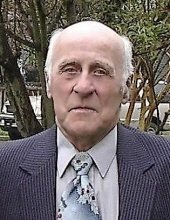 Tom moved from Northwood to Mason City about 1939 and began work as a carpenter. He joined the US Army in July 1943 and served in the Pacific Theater including Guadalcanal and Philippines Islands. Sgt. Dixon was honorably discharged from the army in June 1946.
Upon returning home, he began work as a carpenter once again. He retired after working for Don Gilbert Construction Company in 1977 after working for Don for over 18 years. After nearly 54 years of marriage June died on October 5, 1994.

Tom was a member of Trinity Lutheran Church and the Mason City VFW post. He enjoyed auctions, collecting clocks, traveling all over the Midwest to attend and participate in clock auctions and finally repairing clocks.

He was preceded in death by his wife June, 4 brothers and two sisters, 2 grandchildren.

To send flowers to the family in memory of Thomas Milburn Dixon, please visit our flower store.