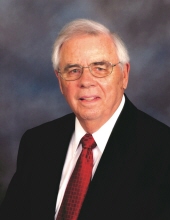 Thomas E. Manning, also known to many as Tom or Gene, passed away on Wednesday, November 6th, 2019, at the Good Shepherd Health Center.

Visitation will be held one hour prior to the service time on Saturday.

Interment will be held in Elmwood – St. Joseph Cemetery.

Memorials may be directed to Trinity Lutheran Church.

Thomas Eugene Manning was born in Fairmont, MN on April 21, 1922 to Thomas Snow and Lulu May (Myers) Manning. The family lived in a number of states due to his father’s profession and they returned to Mason City, Iowa in 1932. He graduated from Mason City High School in 1940. During his time in Mason City, Thomas was active in Boy Scouts, receiving his Eagle Scout Award in 1937 and played the French horn in the high school band.

Thomas enlisted in the Navy in 1942 as a carrier fighter pilot in the Navy Air Corps and did submarine patrol from Moffett Field in California. He later re-enlisted in the Army Air Corps in Fort Hood Texas and was commissioned as a 2nd Lt. Chemical Warfare, AUS and taught at the Officer Candidate School. He was discharged in March, 1946. Thomas resumed his education at Mason City Junior College (Now NIACC) and received a degree in Engineering from Iowa State University in 1949.

Thomas was united in marriage to Marjorie L. Anderson in 1947 in Stanhope, Iowa. After his graduation from college, they made their home in Charles City, Iowa for 35 years. Their daughter, Cynthia (Manning) Zach, was born in Charles City.

Thomas held many management positions at the Oliver Tractor/White Farm Equipment plan until its closer in the 1980’s. While in Charles City, he was involved in many community civic organizations; United Way, Salvation Army, YMCA and Lions International. After the Tornado of 1968, the City Council appointed Thomas as the Chairman of the Redevelopment Commission to help rebuild the downtown area.

After his retirement from White Farm Equipment, Thomas and Marge moved to Mason City, where he was able to enjoy playing golf with his friends as well as teaching his grandson how to golf. He was an active member of Trinity Lutheran Church and enjoyed the Men’s Bible Study Group.

He was preceded in death by his parents, sister, Virginia Lenhart, and Marjorie, his wife of 58 years.

To send flowers to the family in memory of Thomas Eugene Manning, please visit our flower store.