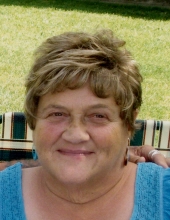 Theresa Kathern Gabel, 76, of Mason City, passed away Friday, July 10, 2020 at her residence. A memorial service will be held at 1:30 PM Wednesday, July 15, 2020 at the Major Erickson Funeral Home, 111 North Pennsylvania Ave, with Pastor Debra Devine officiating. It will be live streamed on the Major Erickson Facebook page. Inurnment will follow in the Elmwood-St. Joseph Cemetery. Visitation will be held one hour prior to service time on Wednesday at the funeral home.

Theresa was born March 25, 1944 the daughter of Sam and Mildred (Denny) Werstein in Mason City, Iowa. On October 7, 1961 Theresa was united in marriage to Roger Gabel in Sioux Falls, SD. To this union three children were born, Tina, Michele and Adam.

Her family will always remember her for being a loving and dedicated Mother, a great cook and her witty sense of humor.

Theresa enjoyed her social coffee with the girls every morning, putting together puzzles, playing cards, watching Survivor with her friends and betting on who would win. She also looked forward to checking out the goodies at the local thrift stores, traveling when she was able but most of all spending time with her family.

Those who have shared in Theresa’s love include, the love of her life, Roger Gabel; daughters, Tina Abendroth, Michele (Todd) Borchardt; son, Adam Gabel; grandchildren, Dillon and Danielle; great granddaughter, Adalyn; one sister, Darlene Bryant; one brother, Ronnie (Faye) Werstein; and many nieces and nephews; and Barb Schaefer who was thought of by Theresa as another one of her children.

Theresa was preceded in death by her parents, son in law, Steve Abendroth; brothers, Roger, Richard; and a sister, Donna Mullen.

The family would like to thank Hospice, Darlene Johnson and Georgene Williams for all their help.

To send flowers to the family in memory of Theresa K. Gabel, please visit our flower store.