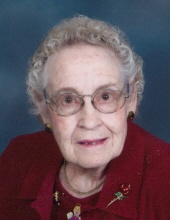 Thelma Arlene Klemensen, 96, of Mason City, IA, died Saturday, January 6, 2018, at the Good Shepherd Health Center. Funeral services will be held at 11:00 AM on Wednesday, January 10, 2018, at Trinity Lutheran Church, 213 N. Pennsylvania Avenue, with Pastor Kathy Graves officiating. Visitation will be held one hour prior to the church service. Interment will take place at the Nora Springs Park Cemetery. Memorials may be directed to the family of Thelma Klemensen.

Thelma was born March 2, 1921, in Grundy County, IA, the daughter of Edgar Franklin and Lizzie Ella (Schwarck) Huen. She attended country school and then Eldora High School in Eldora, IA. She married James Robinson on September 25, 1937. They lived on farms in the area until moving to Nora Springs, IA in December of 1950. She was later employed at Mode O’ Day sewing factory in Mason City for 6 ½ years. She also did babysitting and restaurant work in Nora Springs. For several years, she helped in Grundy County with her elderly parents and 2 aunts that were living in their parents home in Hardin County. She moved to Mason City in 1975, after she married Kenny Thompson. He passed away on January 1, 1979. She later married Martin Klemensen on August 23, 1979, and went to visit some of his relatives in Denmark. He passed away on March 30, 1994.

Thelma has been active in the Senior Citizens Center since 1975 and Rebekah Lodge since 1963. Thelma was baptized in the Methodist Church in Nora Springs. She was a member of Trinity Lutheran Church since 1976. Thelma was also a member of the Eagles Lodge Auxiliary, Women of the Moose and Royal Neighbors Lodge for many years. She enjoyed sewing, crocheting, gardening, taking care of her many house plants, playing cards, dancing, traveling to many countries and visiting family members.

To send flowers to the family in memory of Thelma A. Klemensen, please visit our flower store.