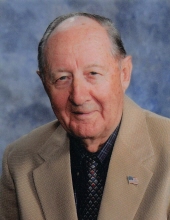 Ted R. Enabnit passed away February 17, 2022 at the age of 94 at his home in Stillwater, MN. Ted was born September 2, 1927 in Mason City, IA and was the son of the late Elgin and Clarice Enabnit. He was preceded in death by his parents, wife Martha, wife Carol, three brothers and a sister.

After practicing law for over 40 years, Ted enjoyed his retirement, spending time with his family, traveling to his bucket list locations, continuing to volunteer and other civic activities. Ted was a lifelong Iowa Hawkeyes fan (which he passed onto his kids). He loved attending Hawkeye football games with family and friends, continuing to spend Fall Saturdays in Iowa City and attending Iowa Bowl games to cheer on the Hawks.

Ted is survived by his companion, Judy Brunsvold; sisters Shirley and Betty; five children, Karen, Jeff, Kevin, Brian and Jill and their families.

A luncheon will be served after interment at Trinity Lutheran Church’s Fellowship Hall to visit with the family and fellowship.

The family requests that in lieu of flowers, contributions in TE’s memory be made to the University of Iowa College of Law or the Kinney Pioneer Museum in Mason City, Iowa.

To send flowers to the family in memory of Ted R. Enabnit, please visit our flower store.