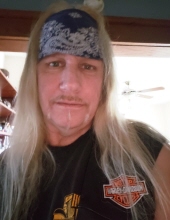 A celebration of life will be held at a later date.

Memorials may be directed to the family of Steven Goetsch.

Steven was born on April 10, 1959 to parents Harold and Louise (Baade) Goetsch in Mason City. He attended Clear Lake High School until 9th grade. When he turned 17, he enlisted in the Marine Corps. Steven was stationed at Camp Lejeune in North Carolina until he was honorably discharged in 1978.

Steven worked at Alexandra Batteries in Mason City for 11 years. While working there, he met his significant other, Carmeen Barr. The couple has been together since 1998.

Steven was a small engine mechanic; he liked working on motors, and he absolutely loved his Harley. He was always known to lend a helping hand to those who needed it, and he will be dearly missed.

Steven was preceded in death by his parents, and one brother, Jeff Goetsch.

To send flowers to the family in memory of Steven M. Goetsch, please visit our flower store.