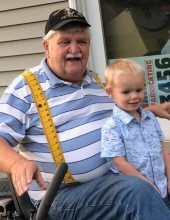 The memorial service will be live streamed on Major Erickson Funeral Home’s Facebook page at 10:30 A.M. on Thursday, September 17, 2020.

Inurnment will be held at a later date.

Memorials can be directed to the family of Steven Juhl.

Steven Craig Juhl was born on November 16, 1951, in Mason City to parents Dallas and Carolyn (Maloy) Juhl. Steven grew up in Mason City and graduated from Mason City High School in 1970. Upon graduating Steven joined the United States Army serving during the Vietnam War and was stationed in Germany. Upon returning home Steven was united in marriage to Julie Pannhoff in 1974, between this union the couple had two children Nate and Amanda. After his time in the military Steven began working for Gibbs-Cooks and later became a Truck driver working independently for various companies with Stockberger being one of his favorites to work for. During this time he also worked various jobs. On May 1, 1999, Steven was remarried to Arla Murray (Legler) in the Bethlehem Lutheran Church in Mason City.

Steven was very interested in stock car racing and especially trains, so much that he was a member of the North Iowa Model Railroad Club at the South Bridge Mall. He was also a big fan of Fords and looked to restore old hot rods. Steven was very patriotic and was a member of the Cerro Gordo Democratic Party, he was also a member of Bethlehem Lutheran Church. Family was very important to Steven, he enjoyed spending time with his grandchildren and enjoyed picking on his family as well.

He was preceded in death by his parents, Dallas and Carolyn Juhl; sister, Lois Kremer and brother Kent Juhl.

To send flowers to the family in memory of Steven Craig Juhl , please visit our flower store.