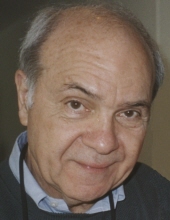 Visitation will be held from 4:00 to 6:00 PM Tuesday at Major Erickson Funeral Home.

Interment will be held in Elmwood St-Joseph Cemetery.

In lieu of flowers, donations may be made to the Charles H. MacNider Art Museum, MercyOne North Iowa Hospice, and the Holy Transfiguration Greek Orthodox Church in Mason City.

Affectionately known as “Soc” to most, he was a beloved husband, father and friend, distinguished attorney, and leader in the Mason City community.

Socrates was born on April 22, 1933 in Mason City, Iowa, to George and Maria Pappajohn. The family co-owned the Evia Meat & Grocery, named for the island in Greece from where George and Maria emigrated. When Soc was eleven, his father died suddenly, and he and his two older brothers continued to work at the grocery store with their mother to support their family. In 1951, Soc graduated from Mason City High School where he was a defensive stalwart as captain of the football team and president of the student council. He received the MCHS Distinguished Alumni Award in 2002.

Soc attended the University of Iowa, graduating with a B.A. in 1956 and a J.D. with distinction from the College of Law in 1958. While at the U of I, he was active as a Colonel in R.O.T.C, president of the Union Board, and member of the Omicron Delta Kappa national honor society, Phi Delta Phi legal fraternity and Phi Gamma Delta social fraternity.

Soc met his wife, Elaine Patrou, on a blind date at U of I and they married in 1957. After graduating from law school and passing the bar exam in Iowa and Florida, Soc served his country in the U.S. Air Force as First Lieutenant and the Chief Claims Officer in the office of Judge Advocate. Stationed at Cape Canaveral, Florida for 2 years, Soc represented the Air Force on many claims arising from ballistic missile test launches gone awry – the early research & development that was a precursor to the space program – and enjoyed surf fishing off Cocoa Beach in his spare time. Soc and Elaine moved back to Mason City in 1960 to start their family and Soc’s law career.

A practicing attorney for nearly sixty years, Socrates began by establishing his own law office and serving as the Assistant County Attorney for Cerro Gordo County. In 1962, he joined the firm that eventually became Pappajohn, Shriver, Eide and Nielsen P.C., and where he specialized in trusts and estates, and corporate law. During his distinguished career, he received many accolades, including listed as one of the top trusts and estates attorneys in the U.S. by The Best Lawyers in America®, 2000-18. Socrates was also an Iowa State Bar Foundation fellow, Cerro Gordo County Bar Association President and Iowa State Corporation Committee Member. Socrates was a staunch advocate and advisor, helping his clients and friends navigate difficult legal and business matters. He was also an invaluable mentor to many young attorneys. Socrates deeply valued, respected and was most grateful for the relationships he developed with his colleagues and clients over a lifetime career.

As a native son, Soc loved the Mason City community and was very engaged as a supporter and leader throughout his lifetime. He was on the board of directors at the Charles H. MacNider Art Museum for 36 years during a period of significant expansion, utilizing his extensive knowledge of art and bringing legal expertise. Other volunteer involvement over the years included: Junior Chamber of Commerce, Chairman of the North Central Iowa Red Cross Chapter, Mason City School Board Member, advisory committee for the Citizens for the Mason City Public Library. Soc was also instrumental in bringing the Forest Park Medical Center to fruition. He was an active member of the Holy Transfiguration Greek Orthodox Church and served on its Board of Trustees for many years. He supported numerous other organizations including the Mason City Education Foundation, the North Iowa Mercy Foundation, and The YMCA.

Soc was an ardent fan of the Iowa Hawkeyes and loved pheasant hunting and fishing. A wonderful cook and grill-master, Soc enjoyed entertaining and bringing people together, especially family, and always with great wine. He had a quick wit and enjoyed conversing on many different topics. He was also a compassionate listener, making people feel at ease in his presence. In his younger years, he socialized and danced at the Surf Ballroom, enjoying the big bands of the 50’s. In his later years, he enjoyed family vacations and travel, spending summers at the Outing Club in Clear Lake, and loved being a “Papou” to his grandchildren. Soc remained close to his mother and two older brothers throughout his life, and the families often spent holidays and vacations together. Soc’s genuine kindness and compassion, his steadfast counsel, and his desire to help others will be remembered by those who knew him.

To send flowers to the family in memory of Socrates G. Pappajohn, please visit our flower store.