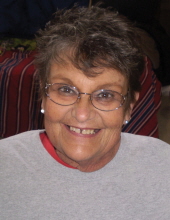 Shirley Lorene Mitchell, 74, formerly of Mason City, died on Sunday, July 21, 2019, at MercyOne Medical Center Des Moines. A memorial service will be held on Sunday, July 28, 2019 at 1:00 p.m. at Major Erickson Funeral Home, 111 North Pennsylvania, with Pastor Kathy Graves officiating. Visitation will be held one hour prior to service time on Sunday. Memorials may be directed to the family of Shirley Mitchell.

Shirley Lorene (Wearda) Mitchell was born on October 18, 1944 in Webster City, Iowa and is the daughter of Edward and Thelma (Douglas) Wearda. Shirley graduated from Webster City High School in 1963, moved to Mason City and attended Hamilton Business College. On November 1, 1969 Shirley married Robert (Bob) Mitchell and they raised their family in Mason City, Iowa. They had two daughters together: Sheri Lynn and Stacie Jo and Bob had one daughter from a previous marriage, Julie Ann.

Shirley spent her life taking care of her family. She stayed at home when her daughters were little and returned to working when they were in middle school. She worked as the account manager with Bob at Peterson Electric Motor Service. She also worked for Trinity Lutheran Church and Mason City Clinic. Shirley most loved spending time with family and friends. She spent a lot of her time with her daughters and their families and friends and loved being a grandmother. She enjoyed sewing and quilting, scrapbooking, cooking and baking for her family and spending time relaxing with Bob after they both retired. Shirley and Bob moved to Friendship Haven Assisted Living in Fort Dodge, IA in 2016. Shirley will be remembered for being nurturing, understanding, easy-going and loving to chit chat. She was always taking care of others and would always put her family and friends first before herself. And her wonderful laugh will be remembered by all who knew her.

Shirley was preceded in death by her husband, Bob Mitchell and her parents, Edward and Thelma Wearda.

To send flowers to the family in memory of Shirley L. Mitchell, please visit our flower store.