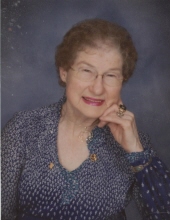 Interment will take place in the Saint Ansgar City Cemetery.

Memorials may be directed to the family of Shirley Hanson.

Shirley Ester Hanson was born on October 21, 1934 to parents Louis and Emma (Lastine) Dippel on their family farm near St. Ansgar, where she went to school and graduated from St. Ansgar High School. She then went onto attend Hamilton Business College in Mason City. She met Merrill (Don) Hanson and the two were united in marriage on June 18, 1955. They were happily married for 47 years until Dons passing. Don and Shirley raised two sons Randy and Marshall.

Shirley worked for Pittsburg Plate Glass as a secretary, she then raised her sons until they were in junior high and returned to work. At AMF Skamper she was responsible for the electric wiring in campers, later working for Snider Metal building ice machines until IMI Cornelius bought them out and continued to work for them for many years until her retirement.
Shirley was active with Wesley United Methodist Church, her St. Ansgar class reunions and the Senior Citizen Center, Mason City. She loved to travel and went on many trips all over the U.S. until Alzheimer’s took over.

Shirley loved family time taking care of her husband, sons and many of her son’s friends. Shirley loved camping and fishing trips to Glenwood, Minnesota where they kept their camper for 24 years until Don passed. Don and Shirley loved dancing and she continued to dance at the Surf Ball Room and the Senior Citizen Center.

She was preceded in death by her husband: Merrill Hanson; son: Marshall Hanson; parents Louis and Emma Dippel.

To send flowers to the family in memory of Shirley Ester Hanson, please visit our flower store.