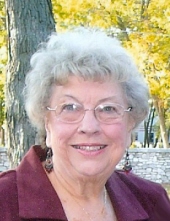 Shirley A. Nasheim, 85, of Mason City passed away Thursday, November 1, 2018 at the Muse Norris Hospice Inpatient Unit in Mason City.

A memorial service will be held 10:30 A.M., Saturday, November 10th at Our Saviour’s Lutheran Church in Mason City with Rev. Matthew Muters officiating. Inurnment will be at Memorial Park Cemetery.

A memorial visitation will be held from 4 to 6 P.M., Friday at Major Erickson Funeral Home, 111 N. Pennsylvania Ave., in Mason City and will resume one hour prior to services at the church.

Shirley was born to George F. and Anna S. (Silber) Schuster on September 4, 1933 in Superior, WI. She lived in Superior for six years. Upon the death of her father in 1939, her mother and siblings moved to Hawthorne, WI where her mother owned a country home. She attended the Hawthorne school from 1st grade through 10th grade. She went on to graduate from Northwestern High School in Maple, WI in 1951. Shirley moved to Arlington, VA to live with her other sister and began secretarial school work at the Pentagon for the Army board of corrections of military records.

She met her husband, Robert W. Nasheim Jr. of Mason City, IA, who was stationed in the U.S.A.F. at Fort Myers, VA. They were married on December 7, 1951. Shirley, Bob Jr. and son Bob III moved to Mason City in 1953. She was blessed with son Ronald in 1959. Through the years she worked as a legal secretary, accounting assistant and for the next 30 years, worked as an insurance service and sales rep. 22 years at Romey/Fischbeck Insurance later Fischbeck/Price Insurance. During those years, she was a C.P.I.W. designation (Certified Professional Insurance Woman). She was an asset to the Insurance Women of Cerro Gordo County Organization and a member of the Women’s Division of the Mason City Chamber of Commerce.

Shirley was an active member of Our Saviour's Lutheran Church, having taught Sunday school for many years, serving on committees and the Altar Guild and introduced the “Salad Luncheon” to the annual Bazaar in 1996. She did visitations to the hospital, assisted living, nursing homes and shut-ins for many years. Those who knew Shirley have enjoyed excellent cooking, surpassed only by her generosity making visits and giving gifts to friends and parishioners in hospitals and nursing homes. You were lucky indeed had you been treated to her special fudge nut bars.

Shirley was preceded in death by her husband; parents a sister; two brothers; and her mother-in-law and father-in-law.

To send flowers to the family in memory of Shirley A. Nasheim, please visit our flower store.