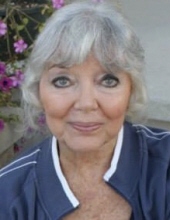 There will be a Celebration of Life service held this summer in Iowa when family and friends can all gather.

Memorial contributions may be directed to the causes she held dear: animal rights through the Animal Welfare Institute, safe and stable homes through Habitat for Humanity NCI at 517 1st St NW, Mason City where her daughter works, and suicide prevention to AFSP at 1427 Amber Court, Mason City, IA. Sherry was an organ donor, and it is estimated that she helped approximately 50 people through her generosity even after her passing.

Sherry Hansen-Steiger was born April 24, 1945, in Dearborn, Michigan. As a youth, Sherry, her mother Lorraine, half-brother Paul Jr., and stepfather Paul Lippold moved frequently due to Paul's career as a trainer for the Ford Motor Company. Sherry graduated from Lake Forest High School in Illinois in 1963 and then attended Northern Illinois University where she met her future husband. Sherry and Paul Hansen were married in February of 1966 and soon after, Sherry lost her brother Paul Jr. to teenage suicide. Paul and Sherry’s internships and ministries took them to Rock Island, IL, Austin, TX, Chicago, IL, and Long Island, NY. Throughout their marriage, they worked on ministries with troubled youth, addictions, and suicide prevention. While living in Long Island, a son, Erik, and daughter, Melissa, were born. Paul was called to lead a church in Ohio in early 1975, where they lost their son Erik in a tragic car accident later that year. Sherry and Paul were divorced soon afterwards.

Sherry and Melissa then moved to Virginia Beach, VA where Sherry founded "The Butterfly Center for Transformation," one of the earliest non-profit schools that focused on stress management and the holistic interaction between the body, mind and spirit. In addition, Sherry modeled and appeared in such publications as Family Circle, Redbook, and Women’s Day. Sherry also worked in advertising, writing commercials for TV and radio, and promoting concerts for such notables as John Denver, Neil Diamond, the Moody Blues, Lou Rawls, Prince, and Melba Moore.

In 1982, Sherry and Melissa moved to Phoenix, AZ. While in Phoenix, Sherry became reacquainted with Brad Steiger, whom she had met in previous years through the same lecture circuits. On September 30, 1987, Sherry and Brad were married and Sherry acquired four children: Bryan, Steve, Kari, and Julie. From that point on, Sherry and Brad were inseparable as they continued to lecture and travel around the world. They were regular guests on the radio show “Coast to Coast” and appeared on TV shows such as The Joan Rivers Show, Hard Copy, Entertainment Tonight, and Inside Edition. She authored the books Seasons of the Soul and The Power of Prayer to Heal and Transform Your Life, and together she and Brad wrote over 40 books on topics such as miracles, angels, UFO’s, and animal intelligence. Sherry and Brad moved to his home state Iowa in 1992, and continued their work researching and writing books together until Brad’s death in May of 2018.

To send flowers to the family in memory of Sherry Lorraine Steiger, please visit our flower store.