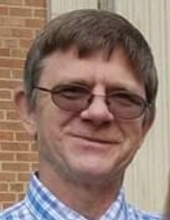 Masks are recommended but not required.

Memorials may be directed to the family of Scott Davison.

More kindness and a lot more smiles and laughter arrived at the pearly gates with Scott H. Davison being added to the morning flock.

Scott was greeted at the gates by his parents, Sam and Orean; brothers David (Dave), Gary, and Bob. Brother-in-law Kurt McClung was ready for a game of pool with brother Dave at the Stone Toad. Friends, Steve and Kenny True had their quarters waiting on the edge of the pool table to play the winner.

Scott was a Mason City native and a proud Iowan, born on September 4, 1956, he attended Washington Elementary and Monroe Junior High and MCHS ‘75. Following his brothers Dave and Danny love for both sports, Scott participated in football and wrestling. He made wonderful friendships though school and these sports that he continued through life. His sisters contributed to his love of dancing, karaoke, and music, specifically Rock and Roll and “Love Potion number 9” and “Sea Cruise”. He attended Mason City High School where he graduated in 1975, and was a proud member of the MCHS Choir.

Scott’s love for his Family was endless. He felt very blessed to be apart of such a large family, being the baby of ten children, his siblings fondly recall Scott being very easy going and the best out of them all. He enjoyed and played Hours and Hours of card games of 500, canasta, poker with family. Some of his well-remembered activities where playing foosball and pool at Ransoms, Monday Night Football, playing Broomball, as well as telling and listening to stories from loved ones and friends.
Scott was paired to walk his graduation ceremony with Patti Peck as his aisle partner, and as fate or destiny would have it, on June 9, 1979, Patti and Scott were married. They enjoyed 42 years of marriage and 46 years in each-others company, where they enjoyed simple fun together, which often turned into sensational silly moments and laughter. Scott cherished his work family at Minnesota Rubber Company/Quadion Corp in Mason City and was extremely proud of his 40 years. Scott and Pat had one daughter, Hilary Ann and were blessed with six grand-munchkins, who Scott loved so dearly, and smiles beamed when they were able to all be together. Scott will be remembered for his smile, infectious laugh, witty sense of humor, honesty, and his caring disposition to all.

To send flowers to the family in memory of Scott H. Davison, please visit our flower store.