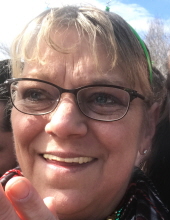 Funeral services will be held at 10:30 AM Tuesday, July 16, 2019 at the Major Erickson Funeral Home, 111 North Pennsylvania Ave with Pastor Karen Young officiating. Interment will be held in the Elmwood-St. Joseph Cemetery. Visitation will be held Monday July 15, 2019 from 5 until 7 PM at the funeral home. In Lieu of flowers memorials may be directed to the Sandra Pietig Memorial Fund in care of her family.

Sandy K Pietig was born on April 29, 1966 in Hampton, IA. She was the daughter of Harold and Ann Buchanan. Sandy was reunited with her birth mom in 2000. With her reunification she was able to reunite with another family. Sandy grew up on the farm and was active in her 4H until she graduated from high school. Following high school, she went on to attend the University of Minnesota where she later graduated from the Veterinary Technician Program. She went to work as a Vet Tech in Carroll, IA where she met Jeff. The two married and relocated to Mason City where they began to raise their four children. Sandy devoted her time to raising her four children up until the high school years where she began working in the food service industry. Over the years she waitressed and managed several establishments up until her recent position at Highland Golf Course. Sandy’s work ethic could be compared to none.

Sandy spent hours in her garden looking forward to reaping the canning the harvest of her labors . She enjoyed attending her children's activities when they were in high school and then sending them care packages as they grew. Sandy’s two greatest pleasures in life were her children and cooking.

Sandy was preceded in death by Jeff Pietig and Ann and Harold Buchanan.

To send flowers to the family in memory of Sandra Kay Pietig, please visit our flower store.