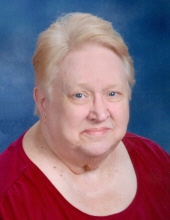 A gathering of family and friends will be from 3 to 5 p.m. Sunday, May 13, 2018, at the Major Erickson Funeral Home, 111 N. Pennsylvania Ave. Memorials may be directed to the Sandra Skipper Memorial Fund.

She was born July 7, 1942 in Aurora, Illinois. On Nov. 21, 1967, she married John Skipper in Aurora. They observed their 50th wedding anniversary last November. She held many jobs over the years as the family moved several times before moving to Mason City in 1986 where she spent the rest of her life. The most satisfying of those jobs was with the Mason City Community School System in which she was a paraprofessional at Roosevelt Middle School and secretary at Roosevelt Elementary School and Harding Elementary School for nearly 20 years altogether until her retirement.

She was an active member of First Covenant Church before her health began to fail. She served on many church boards and committees and in the church choir. One of her fondest memories of church activities was being part of the church’s “Living Christmas Tree,” an annual church program for several years. She also enjoyed being a volunteer at Mercy Medical Center – North Iowa.

She was preceded in death by her parents and one brother.

To send flowers to the family in memory of Sandra A. Skipper, please visit our flower store.