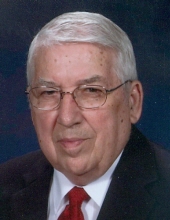 Samuel S. Mast was born October 18, 1927 in Sikeston, Missouri to parents Samuel and Barbara (Miller) Mast. Samuel grew up in and attended Fairbanks High School in Fairbanks, Iowa. After graduating from high school Samuel went on to graduate from UNI (Iowa State Teacher College) with a BA and MA in Mathematics. In 1950 he enlisted in the United States Army, reaching the rank Sergeant 1st Class, he was honorably discharged in 1952.

After being discharged from the Army Samuel would go on to teach for nearly 40 forty years. 30 of which were spent being a professor at North Iowa Area Community College. In his spare time he enjoyed working with wood in his shop at home, enjoyed golf and baseball, was active in Habitat for Humanity and was a member of the Masons and every Friday you could always find Samuel at Hardees playing cribbage with other members of the NIACC faculty.

He was preceded in death by his parents, 1 brother and 1 sister.

To send flowers to the family in memory of Samuel S Mast, please visit our flower store.