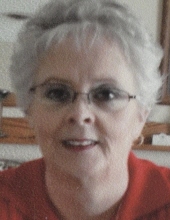 Sally Ann Roberts was born September 26, 1954, to parents Allen and Frieda (Borger) Roberts in Mason City. Sally graduated from Nora Spring/Rock Falls High School in 1972, following her graduation she attended the Iowa School of Beauty in Mason City. Sally was a beautician for many years. After many years of being a beautician Sally went on to work in the records department at MercyOne Medical Center of North Iowa as well as working at Joann Fabrics for many years.

Sally had many hobbies, she enjoyed baking an array of desserts, sewing, different crafts, painting, quilting, caring for her pets and watching the Olympics and other sporting events.
Sally is survived by her twin sister: Sue Calvert/Hallman; brothers: Steve (Lori) Roberts, Scott (Betty) Roberts; many nieces and nephews and special friend Jim Trappe.

She was preceded in death by her parents; brother in-law Richard Calvert and special friend Terry Radcliffe.

To send flowers to the family in memory of Sally Ann Roberts, please visit our flower store.