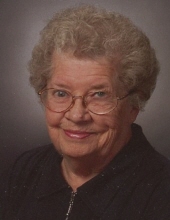 A private graveside service will be held in the Kensett Cemetery.

Ruth was born April 21, 1923, in Kensett, Iowa. She was baptized and confirmed in the Lutheran faith. Her mother passed away when she was eight years old. She then went to live with her Aunt De Etta Landt and family on a farm near Luana, Iowa. She attended country school near Luana and later went to high school in Luana.

When Ruth was nineteen, she moved to Chicago where she worked at the Chicago Towel Company for three years. She was married to Wayne Folsom for nine years. He was in the service of the United States. They traveled to California, Texas, Arizona and Pennsylvania.

In 1954 she came back to Mason City, Iowa, and divorced that year. She attended night school and worked at the Green Mill Restaurant for three years. In 1957 Ruth applied for a position at the American Cancer Society. She was hired for the position of telephone operator, typist and file clerk. She worked there for 28 ½ years, retiring in 1985.

She volunteered many places after her retirement – at the Stockman House, Cancer office and Bethlehem Lutheran Church which she joined in 1954. Ruth was also in Altar Guild for forty-one years. She was an active member of the church which was very important to her.

Ruth is survived by several nieces and nephews, extended family members and many friends.

To send flowers to the family in memory of Ruth J. Rekow, please visit our flower store.