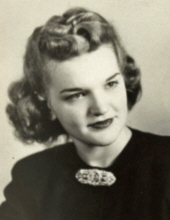 A memorial service will be held at Shepherd of the Hills Lutheran Church in Fountain Hills on Saturday, October 20th at 10 a.m. with interment of ashes to follow in the church garden wall.

The family asks that any contributions be made in Ruth’s name to: The Arizona Humane Society, 1521 W Dobbins Rd, Phx, AZ 85041. Our family would like to thank the staff at Fountain View Village for their loving care of both Ruth and Barney over the last 4 years.

Ruth was a beloved wife, mother, aunt and grandmother who enjoyed baking/cooking and being at home. Ruth made many fast friends throughout her time in Mason City, Iowa raising her family and later in Fountain Hills, AZ Ruth was born on September 8, 1926 in Anderson, Indiana to Charles and Bertha Hauff. Ruth graduated from Indiana University in 1945 with a BS degree. Ruth began working at a hospital lab in Freeport, IL, where, out with her co-workers after work, a young man approached her and introduced himself. It was William B. (Barney) Barnett and although not starting off with a great first impression that night (Mom said), was persistent and acquitted himself sufficiently to date/propose/wed and remain married to Ruth for over 66 years before his passing in August 2016. Ruth and Barney moved to Mason City, Iowa in 1959. Ruth began raising her family and went to work at Mercy Hospital working in the lab. She remained there until retiring in 1991. Ruth was a quiet person who enjoyed being at home, reading the newspaper, doing Jumbles and various puzzles daily, baking and cooking. She had many good friends from various social clubs and from Shepherd of the Hills Lutheran Church in Fountain Hills.

Arrangements are with Major Erickson Funeral Home and Crematory.

To send flowers to the family in memory of Ruth E. Barnett, please visit our flower store.