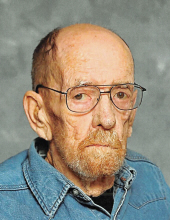 A memorial service will be held 1:30 p.m., Saturday, July 10, 2021 at the Dumont United Methodist Church with Rev. David Wagner officiating. Inurnment will be at the Dumont Cemetery with military rites by the Dumont American Legion Post No. 360.

Visitation will be held one hour prior to services at the church on Saturday.

Russell Louis Borneman, the son of Louie and Trena (Bronsema) Borneman, was born June 7, 1935 in Dumont. He graduated from Dumont High School in 1954. Russell served his country in the U.S. Army from April 1958 to March 1960. Following his honorable discharge he returned to Dumont and helped his father on the farm. On September 9, 1960 he married Vera Wearda. Russell and Vera eventually took over the family farm where they lived and raised their four children.

He was a member of the Dumont United Methodist Church and the Dumont American Legion Post No. 360.

Russell is survived by his children, Julie Borneman of Coralville, Janan Borneman of Ankeny, Bryce Borneman of Dumont and Brooke (Eric) Biven of Shawnee, KS; and two grandchildren, Erica and Ryan Biven.

To send flowers to the family in memory of Russell L. Borneman, please visit our flower store.