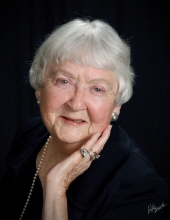 A private graveside service will be held in Memorial Park Cemetery.

Memorials may be directed North Iowa Youth for Christ.

Ruby LeVon (Bonnie) Toepfer was born May 29, 1925, in Des Moines Iowa to parents Don and Ruby Toepfer. Her family called her LeVon, but she had an aunt that called her Vonnie, which soon became Bonnie, which is the name that stuck with her for her entire life.

Bonnie married Bill Lyons in 1945, after Bill returned from service in World War II. They settled in Mason City and raised their family. Bonnie was very active in the Trinity Lutheran church Mason City, and Zion Lutheran in Clear Lake. She taught Sunday school, and enjoyed studying the Old Testament. Her faith, and love for the Lord was a foundation in her life. Bonnie was very generous and supported many outreach ministries. To provide additional family income Bonnie sold Pianos for a number of years out of their home on North Jefferson. Bonnie always had a dog as a loyal companion. She left behind her adored Yorkie Sparkie.

Bonnie’'s most endearing character was her love for her family, and her generous spirit. She had two daughters Debbie and Rebecca. Debbie tragically died in 1980. Bonnie had a good friend, Eloise Martinson, who was like a sister. When Eloise passed away at a young age, she left behind two children, Sandy and Lee, who came to live with the Lyons family. For her last 2 years she lived with her Daughter Rebecca, who provided care. Rebecca committed her to memory and hospice care for her final weeks.

Bonnie was preceded in death by her husband, Bill Lyons, who was the Toyota dealer in Mason City for many years; daughter Deborah; father and mother Donald and Ruby Toepfer; sister Joan Skipton; and brother Bud Toepfer. Bonnie will be buried next to her husband and daughter in Memorial Park Cemetery.

To send flowers to the family in memory of Ruby LeVon (Bonnie) Lyons, please visit our flower store.