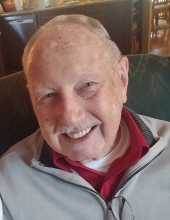 Interment will be in Elmwood-St. Joseph Cemetery.
Ronald “Ron” Edgbert was born November 15, 1938 in Whittier, California to William D. & Helen M. Edgbert, the second of two children. He graduated from Whittier High School in 1956 and later achieved a Bachelor of Arts in Music Education from Seattle Pacific College in 1960. After college, he returned to California, working for several years as a music teacher in the Los Angeles County School District before beginning a career in retail music sales.

Ron married Mary E. Ottengheime on February 21, 1970; to their union was born Jennifer Elizabeth Edgbert (1971) and Jeffrey Warren Edgbert (1972). The Edgbert family remained in southern California before moving to Washington in 1978. Ron continued his career in music sales until his retirement in 2009. Desiring to live closer to his grandchildren and be actively involved in their lives, Ron relocated to Mason City in 2013.

Central to Ron’s life was his love of music. An accomplished musician since his youth, Ron began his involvement in church music ministry in high school, which continued throughout college and his adult life. He loved leading worship from the piano bench and the organ console at South Bay Christian Church and Lakewood First Baptist Church in southern California; at Eastside Free Methodist Church and Westminster Chapel in Bellevue, Washington; and at First Covenant Church in Mason City.

The only things exceeding Ron’s love of music were his love for family and friends and his deep, abiding Christian faith. Whether through music, stories, or gatherings at the coffee shop or around the dinner table, Ron’s desire was to introduce people to each other and to loving and life-changing relationships with Jesus Christ.

Ron’s family wishes to thank the staff and medical team at MercyOne North Iowa Medical Center and Hospice for their attentive and compassionate care during his illness. Ron is survived by his children, Jenni (Jon) Read of Mason City; Jeff (Robyn) Edgbert of Bothell, WA; grandchildren Abigail (fiancé Alex Natzke) Read of Cedar Falls; Timothy, Emily, and William Read of Mason City; and sister Arlene E. Stevens of Kirkland, WA. Ron was preceded in death by his parents.

Remembrances in lieu of flowers may be made to Greater Iowa Youth For Christ (https://greateriowa.yfc.net/) or to First Covenant Church of Mason City.

To send flowers to the family in memory of Ronald "Ron" Edgbert, please visit our flower store.