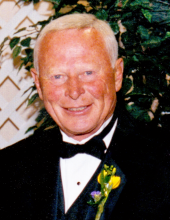 In lieu of flowers, contributions can be made to a charity of your choice in Ron’s memory.

Ron was born on January 4, 1937 in Forest City, Iowa to Milton and Ruth (Rusley) Charlson, and worked alongside his Father Milt on a hog farm west of Lake Mills, Iowa for many years. In December of 1975 he married Pamela Haltom Kinker, and continued to build his legacy in the swine world by selling prize winning Poland Chinas, Spotted and Hampshire Hogs. He also won several awards at numerous competitions and state fairs, including National Spotted Sire of the Year in 1976, which lead to his eventual induction into the Iowa Spotted Swine Breeders Hall of Fame in 1998. After moving on from hog farming, Ron finished out his professional career selling John Deere tractors at Brakke Implement in Mason City, Iowa.

Ron was a fantastic son, brother, husband, father and uncle, and a friend to all. He will be remembered for his love of family and friends and his zest for life. Raise a glass to his memory and to his legacy, he will be missed.

He is survived by his son, Chris (Mindy) Charlson; his step children, Melissa (Joe) Fruscella and Jason (Shelley) Kinker; grandsons Will, Max, Sam and Giovanni; sisters, Marion (Richard) Erickson and Norma (Eldean) Matheson; and many nieces and nephews.

Ron was preceded in death by his parents, Milton and Ruth (Rusley) Charlson; his wife, Pamela; and an infant brother, Robert Charlson.

To send flowers to the family in memory of Ronald Charlson, please visit our flower store.