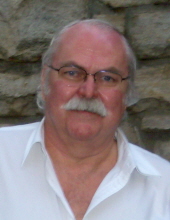 If friends desire, memorials may be directed to the MacNider Art Museum Foundation or to Trinity Lutheran Church of Mason City.

Roger Warren Bang was born September 2, 1949 in Mason City, IA, the son of Hubert P. Bang and Doris E. (Matthews) Bang and older brother of Janet. He was raised in rural north central Iowa where his parents were self-employed and active in civic endeavors. After graduating from Lake Mills High School in 1967 he received his B.A. from Luther College in 1971 graduating cum laude in economics and political science. Roger excelled in baseball from peewee to Luther College where he was chosen as the most outstanding freshman player. Roger has supported Luther College since his graduation–when the Luther Center for the Arts opened Roger and Peggy donated a studio office. In 2001 Roger received the alumni Distinguished Service Award for his exceptional community service and sustained support of Luther college.

On May 27, 1978, Roger married Peggy Newman at Trinity Lutheran Church in Mason City. This family of two lived, worked and volunteered their whole adult life in the city they loved. They frequently traveled together to enjoy art exhibitions, Broadway plays, architecture, historical sites, concerts and sporting events. They supported the restoration of Wright’s designed Stockman House and the Historic Park Inn Hotel. Restoring the 1912 Marion and Walter Burley Griffin designed Melson House was a major project they accomplished together. Being stewards of the Melson House expanded their opportunities to meet others from all over the world including Australia where the Griffins continued their innovative architectural ideas after leaving America. River City Society for Historic Preservation recognized the Bang’s preservation efforts with the Heritage Award in 1996.

Roger knew from experience insurance was risk management that could preserve a family’s way of life when his grandfather cashed in his whole life insurance policy to save their farm during the South Dakota dust bowl. The Insurance business was Roger’s career from 1972 until his death. In 1980 he earned the CLU insurance designation. Roger knew all aspects of the insurance business and held a number of Leadership positions in the Insurance industry. The First Insurance Agency where he worked forty-three years, twenty-two as president, is known for their integrity and commitment to customer service

To be of service to the citizens of Mason City was the reason Roger ran for political office. He was first elected as a Councilman at large in 1989 and then was re-elected for three more terms completing sixteen years. After a brief break he ran for Mayor and served one four-year term from 2006-2009. Some of his successful efforts in City government included passing public bonds on the first vote for the Curries expansion, the Aquatic Center and the Public Library Renovation; moving City hall to its present location and establishing a City Administrator position.

One of Roger’s favorite quotes was” If you enjoy the four seasons there is no better place to live than in North Iowa”. He helped judge sail boat races, supported the Clear Lake Yacht Club sailing school and made lifelong friendships, while living in Clear Lake during the summers and more for several decades. He led the Dodges Point Homeowners Association for a decade making sure no structures were built in the center park. The Clear Lake Chamber of Commerce presented their 2009 North Iowa Service Award to Mayor Roger Bang for his generous support, contributions and outstanding service to the North Iowa Area.

Those who knew Roger more personally knew that he loved to read, interact with many types of individuals, tell stories, and to phone family and friends for a lively conversation. He was a man of great faith and gratitude who had no fear of dying because he knew where he would be going.

Proceeding him in death are his parents Hubert and Doris; and father-in-law Jerry Newman.

To send flowers to the family in memory of Roger Warren Bang, please visit our flower store.