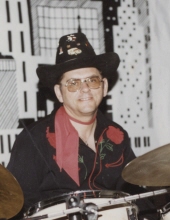 Interment will be held in Elmwood-St. Joseph Cemetery. Memorials may be directed to the family of Roger Prehn.

Roger Paul Prehn was born on January 28, 1943 in Floyd, Iowa. Roger graduated from Mason City High School in 1961. Following high school, he was employed by Houck Drug for several years until enlisting in the United States National Guard Army of Engineers, serving for six years. Following his time in the National Guard, Roger was employed by Winnebago Industries for 26 years. Even after retiring, Roger worked 3 separate part-time jobs.

Roger was united in marriage to Connie Korte in 1966 and the two were married for 18 years. To this union, they had three children, Sherry, Michael and Matthew. Roger had many joys in life, one of which being a member of the HAL’s Ramblers, a band he and his friends had formed. Roger was the drummer of the group and for many years the group played all over the North Iowa/Southern Minnesota area. Roger will always be remembered for having a big heart and his willingness to help others, regardless of the situation. Roger will be truly missed.

He was preceded in death by his parents; brother and daughter, Sherry Prehn.

To send flowers to the family in memory of Roger Paul Prehn, please visit our flower store.