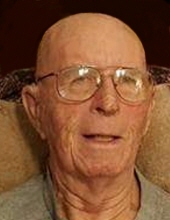 Roger was born November 18, 1926 the son of Herman and Lila (Richardson) Beenken in Mason City, Iowa. While attending Mason City High School, Roger held records for numbers of push ups and sit ups. He continued doing those into his 70’s. Roger graduated in the class of 1944.

Roger began farming at an early age and continued until he retired in his later years. He had a special talent for fixing anything and always added a toggle switch for something so no one else would know how it worked. He did all of his own repairs on the farm, built some of his own machinery for the challenge and helped others with their machinery problems. While doing all of that he maintained jobs at the sugar beet mill, built trailers for Woods in Rudd, North Iowa Coop Elevator and did custom spraying. With his extra time, he restored Ford tractors and pickups. The last fifteen years he wintered in the Rio Grande Valley and always looked forward to time with friends. He always said everyone wanted his job, but couldn’t figured out what he did.
Those thankful for having shared in Roger’s life include his wife, Judy (Bailey) Beenken; son Richard (Nora) Beenken; step-sons, Jack (Geri) Schade, Jeffrey Schade, James Schade, Jerry (Lori) Schade, John (Cheryl) Schade, Joseph (Dawn) Schade; 19 grandchildren, 13 great grandchildren and one great great grandchild.

Mr. Beenken was preceded in death by his parents, Herman and Lila and one son, Dennis.

To send flowers to the family in memory of Roger M. Beenken, please visit our flower store.